I first heard of the Newton Abbot and District Annual Civic Awards in a surprise email.  Acting Chairman Keith Stokes-Smith was inviting me to attend their annual award ceremony on 17th June and I was allowed to bring a guest. I had been nominated for an award by a member of the public.

Recognising the contribution made by individuals/charities/groups of individual and business to civic society , that contribution having been made for no reward or expectation of recognition.

Unfortunately on this occasion there were no nominations for a business, which is a real shame.

Derek Evans from Cotswold Archaeology Ltd gave a very informative and interesting talk at the start.  He showed photos and explained about the excavations  taking place in Newton Abbot near the Clock Tower in Wolborough St. Some artefacts were uncovered made of wood and leather still intact after hundreds of years which is very unusual. They provided insight into life in the town and Roman influences.

After a short break for excellent tea and cakes the awards began.  First all of the nominees were presented with flowers.

In the ‘individuals’ category I have a Merit Award presented by Member of Parliament for Newton Abbot Anne Marie Morris. The category winner is Roger Harding  for his unstinting work over a number of years to revive the Stover Canal.

Tower Sound Radio based at Newton Abbot Hospital is the charity section winner. Merit Awards go to League of Friends  and Teignbridge Homeless Action Today food bank . For League of Friends it is a second consecutive year, showing the value they bring. The awards presenter for this category was Mayor of Newton Abbot, Councillor Ann Jones.

During the photo opportunity a lady approached me to say that she had nominated me. She read an article in the local paper which described the work I am doing to support working dementia carers and local dementia carers. How kind of her to go to the trouble of nominating me! 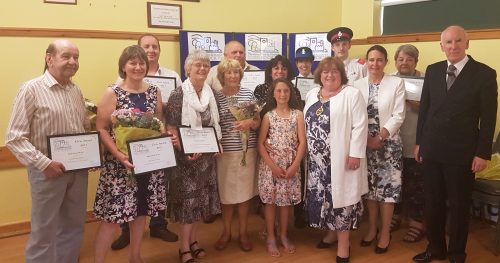 Civic Award winners and runners up with their award presenters

Who could you nominate?

It seems to me that it is a real shame there were not more people nominated. I know there are a lot of magnificent people out there doing fantastic things for our community. I am now a member of the Civic Society and watching out for people and groups who I can nominate next year. Who will you nominate? I am already thinking of Shared Lives South West….and on the look out for a business which deserves an award.