You are here: Home > How we help > Case study: Met Office

A simple model with three objectives:

The idea was assessed and enthusiastically accepted by ‘Idea Street’, the Met Office’s platform for innovative ideas. From then on, the Met Office encouraged and supported the vision.

In June the Union, Prospect, was sponsoring a UnionLearn (Tribal) distance learning course in Principles of Dementia Care level 2. Mary felt this would provide her with invaluable knowledge for the Dementia Carer Network Group she planned to create at the Met Office in July.  This course is very interesting and full of useful knowledge. It taught Mary so much that she wished she had known when caring for her mother. Knowing that her mother  would have appreciated her being able to help others, Mary dedicates her efforts to her mother’s memory.

The Met Office was extremely supportive and Prospect sponsored Mary’s study. A successful Dementia Carer Friendly Workplace depends on buy-in from leadership as well as permission and encouragement for colleagues to engage. This is definitely not a tick box exercise. All your people can see how much you care about your people. The benefit is not only to dementia carers.

Who was eligible to attend?
Past carers; current carers; carers at a distance, carers who were the partner of a member of staff; members of staff who had a partner who was caring; retired staff who are carers; carers from other organisations working on site. All encouraged and welcomed.

The Dementia Carer Network Group started off in a small way in July 14, growing steadily and providing a valuable service to many colleagues. Meeting monthly, our focus was more on practical help than on process, the approach informal and informative.

Feedback from members of this group was positive, giving us new insight into the issues faced by dementia carers and former dementia carers. It was heartening to see members emailing one another to ask for advice or support outside of the meetings. Reviews of our approach, lessons learned and workshop feedback helped to adjust the model and try new ideas.

This was a very interesting development. At first we imagined that buddies would pair to carers with similar experience to themselves to be effective… far from it. In fact we learned that when a carer needed to talk, it made no difference whether the buddy was a current or former carer or what type of dementia they had been dealing with, so long as they had some experience of caring for a person with dementia.

Any employee could access a carer buddy, not just members of the network group – and you could have more than one buddy.

Carer Buddies were asked what they had found challenging about being a carer, what help they had received, what they had learned which they could share and finally what they wanted to know more about. (Receiving this information from all carers would be even more helpful) This information demonstrated the kinds of things which many carers deal with on a day to day basis. Added to our Dementia Carer Network Twiki, it gave insight to other carers and colleagues. 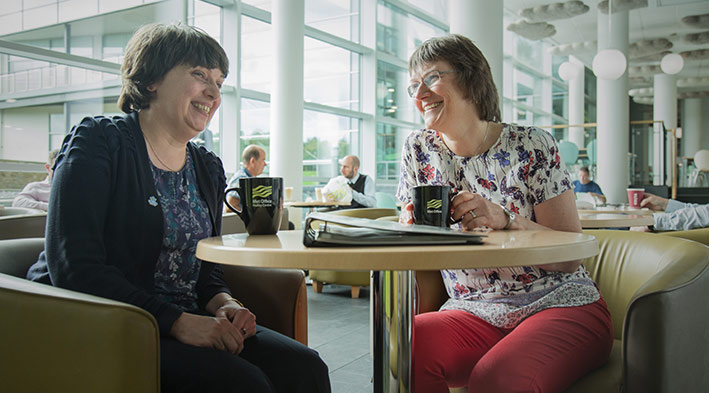 Recognising that some carers may not want to attend a group meeting or may not be available at the arranged time, we decided to trial lunchtime drop-in sessions. Carer Buddies and Dementia Network Group members were available to provide support and on our first session we were joined by a member of Alzheimer’s Society, keen to see what we were doing. The obvious benefit to people attending this highlighted the need for these sessions.

Our journey – The difference it made to employees

The Met Office produced an article in their Barometer magazine which described the impact and effectiveness of Mary’s Dementia Carer Friendly Workplace project on their organisation:

It’s All about the people – Met Office Barometer article

The Met Office’s dedication to creating a supportive working environment has also sparked a host of staff-led groups. For example in 2014, Met Office employee Mary Sherwood launched her initiative to make the Met Office a Dementia Carer Friendly workplace. By raising awareness and understanding of dementia and creating a Dementia Carer Network with Carer Buddies, colleagues have been able to share experiences and support a better carer/work/life balance for those affected by dementia.

This pioneering approach has been so successful that Mary is retiring to concentrate on developing Dementia Carer Friendly Workplaces in other organisations. You can find out more at www.4dementiacarers.org.uk.

Every so often, Met Office groups such as the Dementia Carer Network, the Parenting Network and the Accessibility Network meet as part of the Diversity Action Forum to share news and ideas and discuss how they could support each other. Lorraine is very proud of this sharing culture at the Met Office, explaining the benefit it has to employees:

“These groups are doing so many great things. A crucial part of balancing your work and home life is to be able to share with people who are going through the same experiences and to feel there’s a support network around you.”

As wellbeing at work can cover so many different areas, Lorraine explains that the Met Office is always happy to hear ideas from staff about creating a sustainable, supportive working environment. “It’s really important for people to feel empowered to have a positive effect on the workplace. If people have ideas about how they could support others, we can help them achieve their aims.”